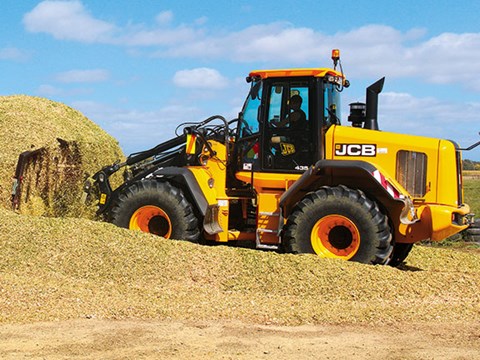 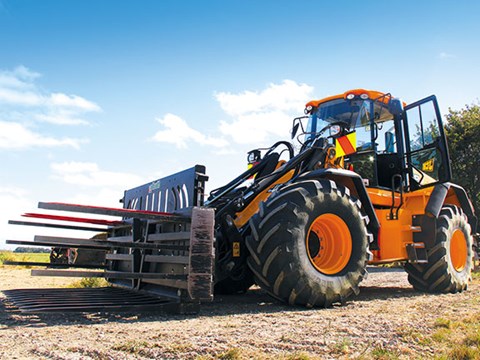 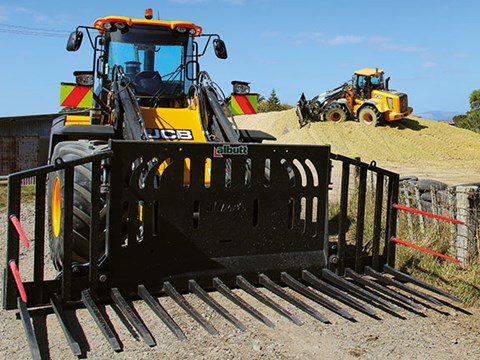 The 435S with 14-foot buck rake and its predecessor in the background, the 434S. 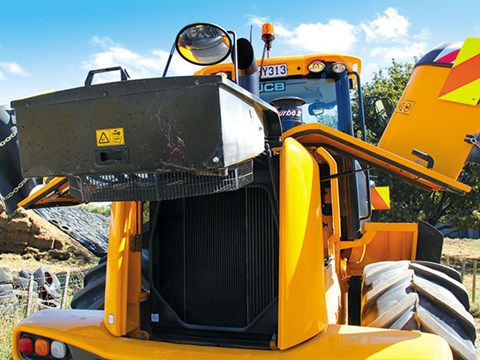 The gull-wing side doors open up to give easy access to all engine service points and the rear radiator. 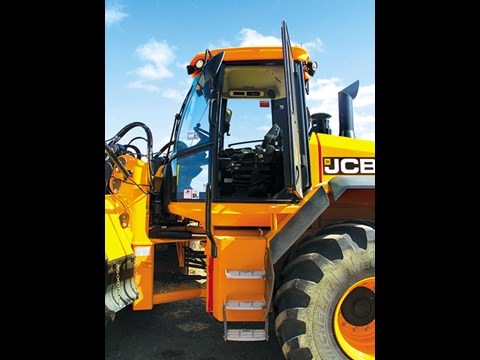 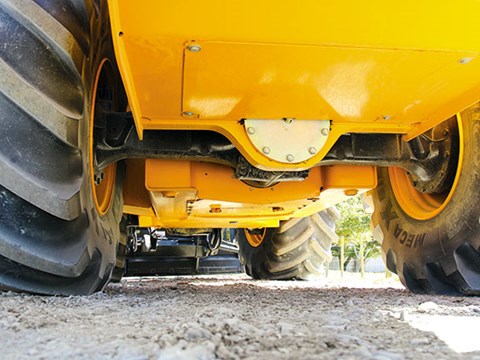 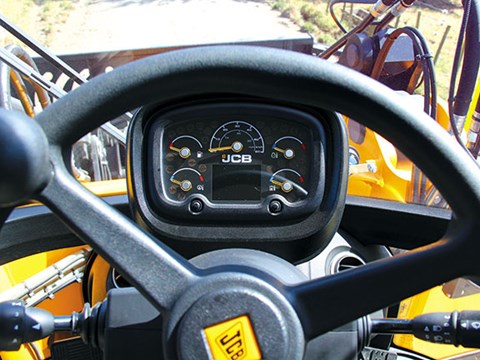 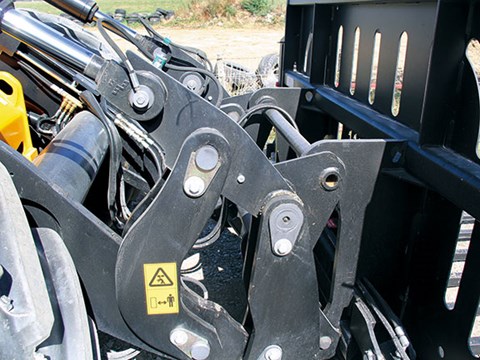 The HT boom is designed specifically for the punishment of stack building. 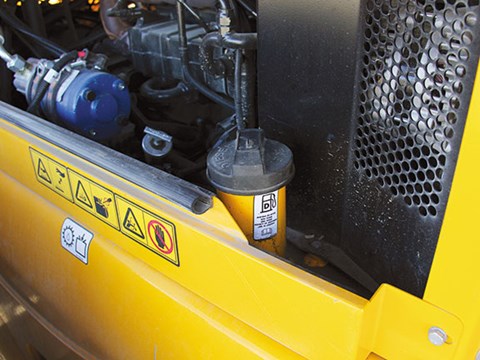 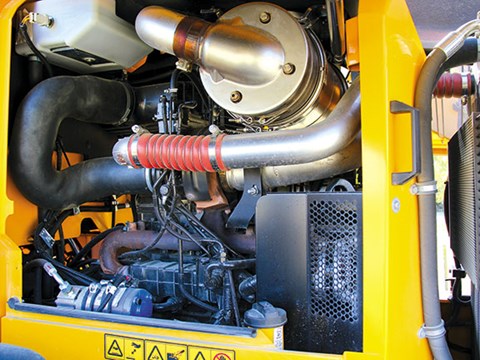 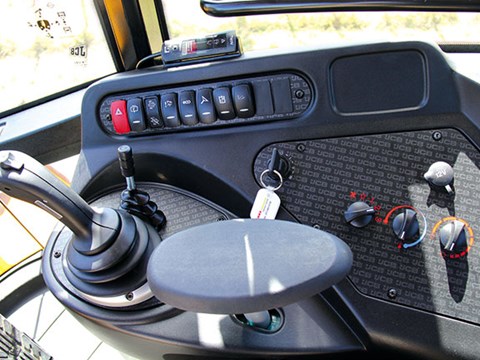 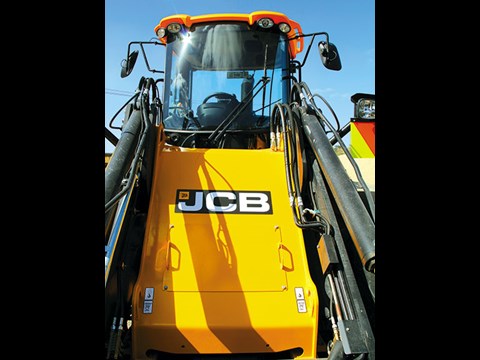 This month Jaiden tests the 435S Agri, the new-and-improved version of the JCB Farm Master 434Ss, and comes away very impressed.

Rolling silage pits, both grass silage and maize, are incredibly hard on any machine. You won't have to talk to too many operators using tractors and buckrakes on stacks to find out about the front axle, diff, kingpins, and transmission problems. Not that there's anything fundamentally wrong with the tractors — it's simply the fact they're not designed to be hitting trailer loads of silage faster than usual, as the pressure comes on as the trailer loads keep rolling in.

For this reason alone, contractors who stack large tonnages throughout the year have started making the change towards specialised machines like the 435S Agri, the new-and-improved version of the JCB Farm Master 434S.

The major change with the 435S over its predecessor is in the drive train. The power to the ground is transferred by the improved ZF six-speed gearbox, which has a lock-up torque converter in every gear, meaning it is 17% faster on the road (48kph top speed).

The ZF axles and limited slip diffs all round allow you to move about and climb the stack, while the diffs are always moving the power. If one wheel slips, it moves the power elsewhere to massively increase traction.

The Cummins 6 QSB 6.7-litre engine produces 230hp, with a peak engine torque of 945Nm at only 1500rpm. It is T4i/3b-compliant with all the confusing acronyms like DPF, EGR, and DOC, which in English are diesel particulate filter with engine gas recirculation and diesel oxidation catalyst. 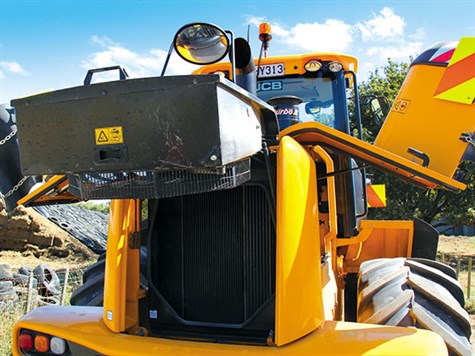 Cummings reckons you will get five years/5000 hours from a particulate filter and is predicting a six-percent fuel saving over the 434S.

Another cool feature is the 435S's hydraulic cooling fan, which automatically reacts to ambient temperature and adjusts the fan speed to optimise cooling, reduce fuel consumption, and lower noise levels.

The JCB 435S's automatic idle feature returns the engine to 700rpm from 950rpm after 30 seconds of inactivity, while eco mode limits engine speed to 1800rpm for reduced fuel consumption.

The air filter is cyclonic, working like a Dyson vacuum cleaner — air goes in, spins really quickly, and the dust drops to the bottom. Although you can also spec it with a scavenger system linked to the exhaust, and the back pressure from the exhaust sucks the dust out.

The unique six-speed forward, three reverse speed transmission, with torque convertor lock-up in every gear, provides closer gear ratios for better acceleration, stack climbing, and performance on the road. The lock-up element eliminates losses from a traditional torque converter, where you simply point it at a hill and it slows down.

The first and second gears are in one group, which you can kick down from the red button on the front of the joystick. It is almost like another half a gear to keep the speed up when climbing steep faces. You can manually go through the gears or flick into auto, which will start in second and go up and down through the whole six speeds.

The hydraulic power is what sets these machines apart from tractors, with their ability to carry and spread such massive buckrakes full of material in one hit. This power comes from two powerful variable displacement pumps which have a massive 264-litre-per-minute flow.

To speed up the spreading time and allow more time rolling, when the boom is being lowered, it fires oil on the other side of the ram to reduce friction. This speeds up the lowering process to the point where it is almost faster going down than it is going up! 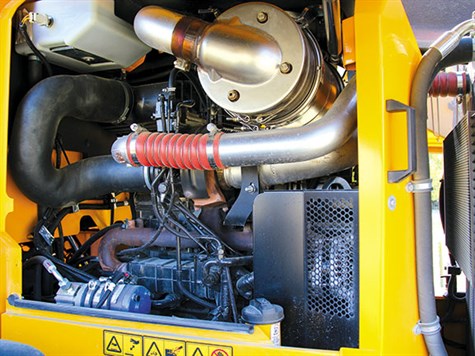 The Agri machines come with the high torque (HT) arm, which is self-levelling. The HT name comes from the strength throughout the full cycle of the boom, providing excellent power, particularly spreading grass when the forks are crowded right over.

The HT front with twin crowd rams offers better forward visibility than a traditional Z-bar on a normal industrial loader. A Z-bar is very good in a quarry and at ground level it has exceptional tear-out power compared to the twin crowd setup on the JCB.

My first impression of the JCB cab was that it had an industrial feel about it — switches and dials dominate the cab layout. To be fair, this basic outlook does have a quality feel to the way it is put together.

However, for all the hidings this machine gives the tractor in the performance and durability department, the modern tractor cab is definitely a more comfortable place to spend the day. Having said that, the JCB is quiet and has Bluetooth radio and climate control.

Switches on the right-hand console allow the operator to set loader height limitations and return to dig and float functions. The Smoothride boom suspension is standard and can be switched off in the cab when on the stack, and it will automatically turn on when going over eight kilometres an hour on the road.

One major benefit of the JCB, for a machine of this size, is that all daily system checks and grease points can be accessed from ground level, including a sight glass for the hydraulic oil level. The test machine was fitted with an auto-greasing system, which does everything except the prop shaft because grease lines and driveshafts are hard to get to work in harmony when spinning at 600rpm!

John Plummer, product sales manager for JCB, pulled out the LiveLink on his iPad and we watched the demo machine's data feed through, which is very impressive and something that will definitely help owners reduce fuel usage, save money, and improve productivity. 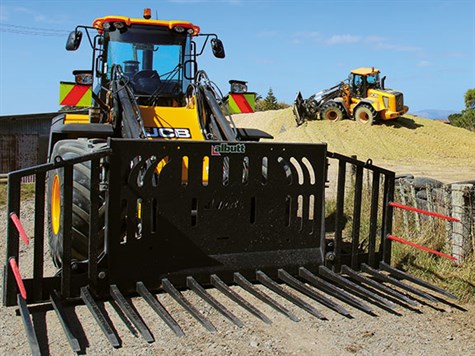 With this machine you get all the benefits of a high-capacity, front linkage-mounted buckrake, with the versatility of a loader mounted to a machine specifically designed for the punishing task, and weighing 14 tonnes.

There are second-hand machines around the country with 9000-plus hours on the clock that have never had more than a set of tyres thrown at them, which is a real credit to the machine's strength, as well as giving the buyer both peace of mind and excellent resale value. 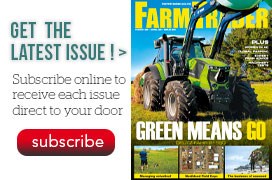 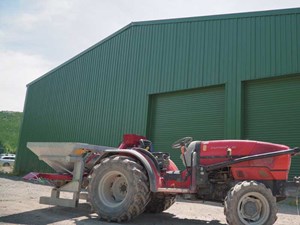